This bread has loads of good nutrition and hearty flavour. 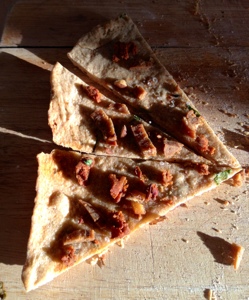 Serve with salads, for a picnic or for children.

* Make a simple stew another day, the exact ingredients aren’t important. For this flatbread I used a big scoop of a stew containing:
75% Cannelini beans
Roasted tomatoes
Roasted onions
Roasted green pepper
Spinach
Leave as much sauce behind in the pot as possible.

Method
Knead everything together except the coarse sea salt, the beans and vegetables will disintegrate.
The dough shouldn’t be too wet, add flour if necessary.
Allow the dough to rest for an hour and then roll it out, using extra flour to dust the table and rolling pin.
Sprinkle over the salt and Choritzo, then drizzle generously with olive oil. Allow to rest for another half hour (or longer), then bake for 30mins at 229c.
This won’t rise much, but it will crisp and be rich and satisfying. You won’t need much with this.

Method
Preheat oven to 180c.
Cut the tomatoes in half, the peppers in little chunks and the onion in strips. Finely grate the garlic and toss all this in the olive oil.
Put everything on a baking tray, making sure the tomatoes all lie skin side up.
Roast for about 30 minutes, turning the peppers and onions every now and again, until the tomato skins have risen and blackened. 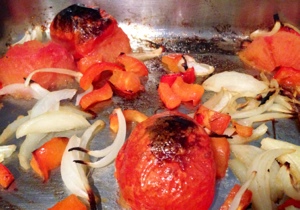 While they are cooking, toast the pine nuts in a dry pan until browned on both sides. (This also be a good time to cook your pasta.)
Remove vegetables from the oven and take the tomato skins off – they should come easily.
For a chunky sauce you can transfer everything to a bowl and mash the tomatoes up a little. For a smooth sauce, use a blender.
Mix with your drained pasta and serve topped with pine nuts, black pepper and chopped basil.

You can freeze left over sauce for pasta or pizza.

Top tip: if you’re using frozen pasta sauce for pizza then allow it to defrost in a bowl. You should get some liquid and a more solid bit- pour off the liquid to thicken the sauce. If you’re having pasta then stir it in.

The burgers are inspired by and based on these Sweet Potato Sliders. I was given two huge sweet potatoes that needed using up- they’re not on my usual shopping list.

This will make approximately eight burgers and eight buns. 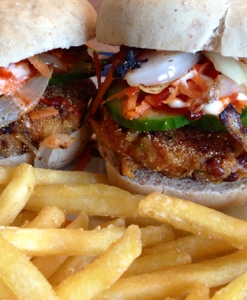 These aren’t a firm meat-like burger, they are soft and full of flavour. Serve with crunchy salad or pickles inside the bun for contrast. I like them on a sourdough bun with quick pickled cucumber and carrot, sirracha and mayo. 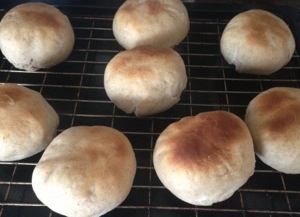 Method
Bake the sweet potatoes at 200c for about an hour until soft, allow to cool.
Fry the onions and celery in the olive oil until translucent but not coloured. Put the onions (in the frying oil) in a bowl with all the other ingredients except the polenta and the sweet potato.
Use your hands to peel the sweet potatoes, put the insides in the bowl with the other ingredients and use your already sticky hands to mash and mix it all together.
Shape eight burgers to fit the buns you’ve made (or little sliders for mini buns) and coat them in polenta.
Place them on a non-stick baking tray or mat and heat the oven to 180c, while they rest a little. 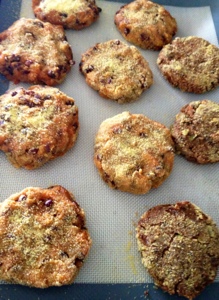 When the oven is hot, put the burgers in and bake for 20 minutes. You can eat them now but, for a firmer and quick-final-stage-cook burger, you can allow them to cool and the fry each side in a pan with a little oil when you’re ready for them. Fry the sliced onion alongside them as a topping.

Serve with salad, chips and all the trimmings.

Aubergine bacon:
Sliced aubergine rubbed with 1 tablespoon sugar, 1 teaspoon salt and 1/2 teaspoon good smoked paprika. Leave in a colander (with a bowl under it) in the fridge overnight.
Griddle to get pretty stripes… 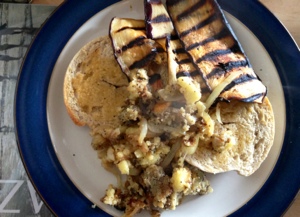 With Sourdough Bagels of Awesomeness: 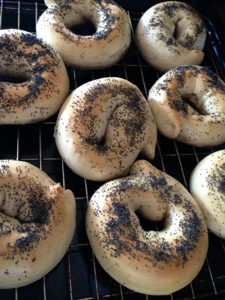 or for extra savoury joy:
Fry an onion in a little olive oil with a teaspoon of garam masala and chilli until just softened. Then add some left over polenta, broken up a little. Cook until the onions have dark edges and the polenta has some crispy bits. You’ll do best with a cast iron pan- ruthlessly scrape off anything that sticks- those are the best bits!

You could also add some chopped tomato, fresh chilli and coriander at the last minute.

More of a mental note than a recipe- simple and good.

Based on this recipe, but with black beans and various other personalisations.

I smoked the beans and aubgerine first, over oak for 8 hours, but you don’t have to. You could try blackening the skins of the aubergine instead, removing them afterwards.

Approximately 8 burgers, to feed 4 with a little salad, or 8 with loads of chips and salsa.

Method
Preheat the oven to 200c.
Slice the aubergine in 2cm (half) rounds. Toss in 2 tablespoon of olive oil and roast for 15 minutes, turn them over and add the onion, garlic and celery. Roast for another 15 minutes.

Remove from the oven and allow to cool.

Whizz the beans, walnuts and toast in a food processor until the texture of rough hummus. Now add the vegetables and gluten, then pulse until they are well mixed through. There should still be identifiable bits of onion and walnut.

Shape into 6-8 burgers and refrigerate for at least half an hour – I freeze half usually.

Sourdough Bagels, the perfected recipe. Reliable and perfect in every respect, at least for my taste.

Method
Start the night before.

Mix and knead well, 2:30 knead in my bread machine or find someone very strong. This dough is like rubber.

Divide into eight equal pieces and roll into 20cm long sausages. Dip one end in water and seal into a circle. Rest in the fridge over night. 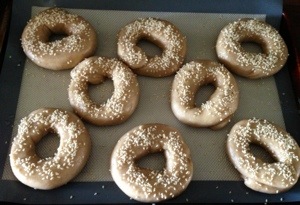 In the morning start preheating the oven to 200c and then boil the bagels in batches for 1 minute, before adding your optional topping.

Bake them in the oven for about 20-25 minutes or until magnificently risen and brown. I use a silicone mat to stop them sticking, a little oil, or flour works too. With a good non stick or well seasoned tray you might not need anything.

Allow them to cool, at least a little, before slicing and toasting.

We got a bag full of free mushrooms and there were some vegetables that really needed using up- cabbage, parsnip and potato. This is a very flexible dish- any rich stew would work well, and the Latkish are tolerant of varying proportions or additions.

I’m pleased with the potato-cakes. They aren’t latkes but they hit the spot.

Method
Peel the potatoes and the parsnips and put into the microwave for 10 minutes. This should leave them almost cooked but still hard. Alternatively you could bake them for around half an hour at 200c and peel them afterwards.

Allow them to cool completely and then grate them in a food processor. Grate the onion as well- you’ll probably have to fish a few bigger ungrated bits out at the end but it beats doing it by hand.

Mix everything thoroughly and shape into cakes, leave them to rest on a plate. If you’re letting them sit for any longer than about ten minutes then cover them in clingfilm and put them in the fridge.

Heat 2 tablespoons of oil on a baking sheet and remove from the oven to place the cakes on it.

Bake at 200c for about an hour until crisp and brown, turning after about ten minutes.

Method
Clean and slice the mushrooms. Strip the outer leaves from the cabbage and slice into thin long strips. Finely chop the garlic, onion and celery.

Fry the garlic, onion and celery very slowly in the olive oil until just translucent. Then add the cabbage and turn the heat up a little.

When your cabbage is fully cooked and starting to colour, add the mushrooms, herbs and nutritional yeast. Cover and allow to cook for about ten minutes. Alternatively, cover and turn off the heat. Leave till you’re ready to eat before bringing it back up to heat.

Then add a splash of wine or stock and allow to simmer for ten minutes, for a thicker sauce you can add a dollop of vegan yoghurt at the end.

Sprinkle with parsley and serve over the crispy Latkish.

Battered Mushrooms and Seitan Choritzo
Even after making the stew I had mushrooms left over, and some Choritzo left over from Pizza Night… So

I mixed a quick batter: 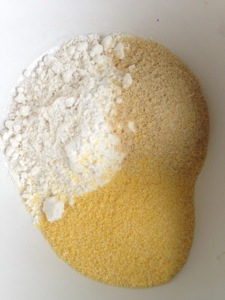 And (in this case):
10 mushrooms and
1/2 a Choritzo from Vegan Brunch

Method
You can use this fast batter on anything- halve the mushrooms and cut up the Choritzo.
Dip and fry…

Serve them with garlic Mayonaise ( I blended 2 cloves with a half quantity of my standard recipe).

Utterly delicious analog of the awesome Tom Yam Gai that C used to make for me when I felt small. His recipe, no photo yet.